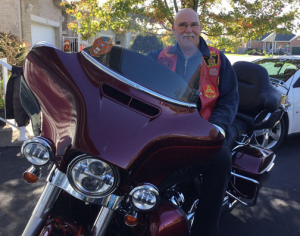 Am a retired full time firefighters I served three years as an Industrial Firefighter with DuPont of Canada before going to work with the city of Kingston Fire Department where I served for 32 years in the following positions, Firefighter, Captain, Asst. Deputy Chief, and Deputy Chief.

I joined the Ontario 7 chapter of the Red Knights in the fall of 1989 and have been the chapters President, Vice President, Treasurer and Road Captain a position I still hold.

At the International level of the Red Knights Organization I have held the following offices.

2016 – Administrator for the Help A Knight Program.