During the 2002 Rhode Island Red Knights convention Don Parker of Massachusetts Chapter 1 presented International President Brouillet with a letter from the town of Boylston board of selectmen granting the Red Knights MC permission to build a monument on town property.

MA1 secured an approximately 1.4 acre parcel in front of the Boylston Town House and adjacent to the Boylston Fire Station. The goal was fulfilled is to have the monument ready by the 25th Anniversary Convention to be held in Massachusetts in 2007.

We continue to need funds to maintain and update names on the memorial. Any donation is greatly appreciated.

*The International Secretary has Red Knights parade flags, poles and harnesses that can be loaned out to any chapter that is riding or marching in a parade.

Resting on a flatbed trailer at a Sturbridge truck stop, the twisted, charred hunk of steel drew a steady stream of observers.

Men and women wearing red vests, leather motorcycle breeches and patches from dozens of fire departments gazed at the object with reverence as their parked Harley-Davidsons and Yamahas waited quietly to be revved up.

The artifact was a remnant of the 9-11 attack on the World Trade Center in New York.

Bearing the numbers C-149 and N-176 that signify its role in the federal investigation, the thick, 5-foot-long piece of steel was part of a floor joist and truss support in the impact area between floors 94 and 98 of Tower 1, where one of the two terrorist- commandeered planes hit.

Now the steel belongs to the Red Knights International Firefighters Motorcycle Club, which was founded in 1982 in Boylston, and with 10,000 members in 13 countries, has grown into one of the world’s biggest motorcycle clubs.

More than 100 Red Knights members from half a dozen East Coast states and Quebec, and their friends and family, mustered early yesterday morning in Sturbridge to escort the 9-11 relic to what will be its permanent home in front of the Boylston fire station. 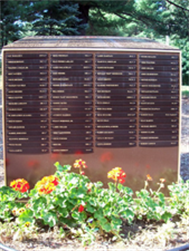 As the Knights gathered in their red regalia, they spoke about the steel’s emotional impact and the long campaign to obtain it. It took the group two years to acquire it through a competitive application process that involved navigating complex bureaucratic channels in New York. The Port Authority of New York and New Jersey finally released the piece last week. 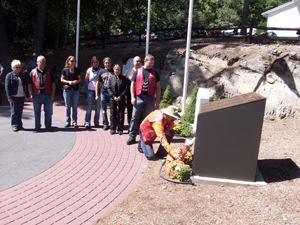 “It’s a sad, heart-wrenching thing to know where it’s come from, but it’s a piece of our hearts,” said Dave Emery, international president of the Red Knights and retired Brattleboro, Vt., fire chief.

“Three hundred and forty three firefighters went down that day, and you can’t help but think that there’s a piece of every one of them in that steel,” said Norm Beausoleil of Millbury, a Westboro Fire Department captain and one of the founding members of the Red Knights.

Capt. Beausoleil added that the thousands of people who died in the attacks are also, to him, embodied by the chunk of metal.

At about 9 a.m., Capt. Beausoleil and his colleagues mounted their bikes, and with a six-man police motorcycle escort, rode to the Boylston fire station at a steady 40 mph in careful formation around the pickup truck and trailer carrying the steel.

At about 9 a.m., Capt. Beausoleil and his colleagues mounted their bikes, and with a six-man police motorcycle escort, rode to the Boylston fire station at a steady 40 mph in careful formation around the pickup truck and trailer carrying the steel.

A small crowd of locals was on hand when the Red Knights rumbled in, and people wandered up to the trailer to view the piece of history.

An informal six-man color guard carried the flag-draped steel to the firefighter memorial the Red Knights built four years ago. The tree-shrouded memorial includes a wall commemorating Red Knights who have died and a stone bearing the etched names of six members killed in the line of duty, including Worcester Fire Lt. Timothy Jackson, one of the six firefighters killed in the 1999 Worcester warehouse fire. 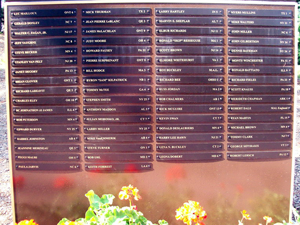 Now that the steel is in Boylston, a lasting installation incorporating it will be designed and erected at the memorial.

“This is a great and memorable occasion,” said Rich Powers, a former Charlton firefighter/EMT and local Red Knights leader who was the primary organizer of yesterday’s event. “We’re paying honor and respect to those who paid the price.”