During the summer of 1982 several firefighters were visiting Randys Cycle Shop in Boylston, Massachusetts and the subject of motorcycle clubs came up.

During the summer of 1982 several firefighters were visiting “Randy’s Cycle Shop” in Boylston, Massachusetts and the subject of motorcycle clubs came up. Soon they were all grousing about the fact that law enforcement people had a motorcycle club known as the Blue Knights but there was no club for firefighters. After this tire kicking session, owner Randy Wilson suggested to Ed Wright, a firefighter from Northboro, MA, that he stop talking about the lack of a club and form one instead. 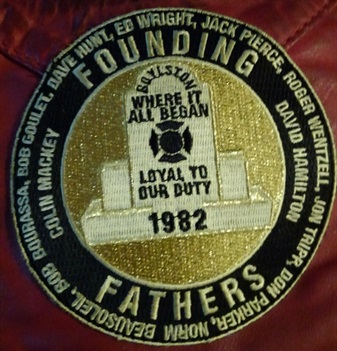 Recognizing a good idea when he heard one, Ed Wright went home that afternoon and made some hand printed posters inviting firefighters from the area to meet and determine if there was enough interest to form a motorcycle club. On August 17th, 1982, Fire Chief Jack Pierce allowed a small group of motorcycle enthusiasts to meet in Northboro Fire Headquarters to lay the ground work for the formation of a motorcycle club.

On October 19th, 1982, firefighters Colin Mackey, Bob Bourassa, Ed Wright, Roger Wentzell, Dave Hamilton, Bob Goulet, David Hunt, Jon Tripp, Don Parker, Norm Beausoleil and Chief Pierce met again. There was interest in promoting the positive image of motorcycling while enjoying the camaraderie of other firefighters. It was decided then that this group would be known as the Red Knights Motorcycle Club.

News of this new club spread like a grass fire. In July of 1983, a chapter was formed in Connecticut. In October of that year a second Massachusetts chapter was formed. Soon applications came in from such distant places as Nevada and Louisiana. In August of 1983 the founding members realized the organization was rapidly growing beyond their original expectations. To properly handle this growth they elected a committee to serve as a National Board of Directors. With applications from Ontario and Saskatchewan, Canada, the club became the Red Knights International Firefighters Motorcycle Club.

As a result of the seed that was planted at Randy’s in 1982, there are now more than 300 Red Knights chapters and 9,000 members throughout the world, Check out our chapter locations page for the various chapter locations. Chapters and MALs are listed on the Member Location Maps.

Come join the fun at all our conventions!

List Of Past Executive and Board Members of the Red Knights Firefighters International Motorcycle Club Inc.