When the club was young, the easiest way to tell others about it was by word of mouth. This meant that the members had to get out to visit other firefighters, and one of the best ways to do that was to visit Fire Stations. Someone came up with the idea of rewarding members who made a certain number of visits with a certificate and a pin. Proof of these visits was needed and so the idea of Grand Tour was born. After visiting Fire Stations beginning with the letters G R A N D T O U R members were given a pin. Over the years, other rides were added, RED KNIGHT and FIRE HOUSE rides and for members from remote areas, a ride to visit TWELVE STATIONS beginning with any letter of the alphabet. For those who want the ultimate, you can choose the ALPHABET tour which includes all the letters in the alphabet. WOW!

In the spring of 2009, it was decided to make some changes to the program. After numerous inquiries as to why we did not have a separate pin for each of the rides available, it was decided that we would offer a three inch patch (of the same design as the pin) with a rocker for each of the rides. A database will be kept to track who has completed the rides. When you have completed your visits simply fill out the application form and return it with your pictures to the Grand Tour Chairperson and he/she will send you your certificate and patch and rocker (or just the rocker if you already have a patch). Note: At the Board Meeting in August of 2013 it was decided that members would no longer earn a pin for completing the four shorter rides but that the remaining pins should be given to guests (non-members) who might ride with members when completing a Tour. To that end, please indicate on the application form if a rider or passenger is a guest. Guests will then receive a certificate and a pin. Photo albums (physical and electronic) will be kept displaying pictures of everyone who has completed the Grand Tour and will be available for viewing at all future conventions (upon request only). Because of the large number of members completing rides and the number of photographs we now have on file, it is becoming harder to ensure that all the pictures will be at all future conventions (the 9 albums weigh almost 70 pounds). It was decided at the Board meeting in September of 2011 to scan all our photos and store them electronically. To that end we now have a new email address, grandtour@redknightsmc.com and we ask that, if possible, you send all pictures and applications there. Please make sure that your pictures are no larger than 100KB each. 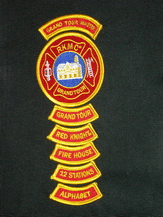 If you know of a link that shows all of the fire stations in your courntry, please email the webmaster and that link can be placed here also. If you have any questions please email the Grand Tour Committee at grandtour@redknightsmc.com


How Do I Earn a Grand Tour Patch, Rockers and Pin?

In order to earn a Grand Tour Certificate, Patch and Rocker you must, during the course of one (1) calendar year, visit nine (9) fire Stations whose names begin with each letter in the three (3) Tours GRAND TOUR, RED KNIGHT, or FIRE HOUSE. The TWELVE STATIONS can be any twelve (12) stations beginning with any letter of the alphabet.
The Alphabet ride can be completed over multiple years and is the only ride that does not have to be completed in one riding season. Stations must begin with the following Letters A,B,C,D,E,F,G,H,I,J,K,L,M,N,O,P,Q,R,S,T,U,V,W,X,Y,Z
You must have a picture of you and your motorcycle taken at each station, with the name sign visible and readable (your motorcycle not just parts of it showing in the picture). Pictures can only be used for one tour. You must be on the International Roster in order to receive the Patches, if you are not on the roster your application will be delayed or you will be listed as a guest. The TOUR is only for Fire Stations / Departments. Ambulance Departments / EMS Departments cannot be used.
** A motorcycle is classified as any vehicle that needs a Motorcycle License to operate**
Co-riders may also earn a Certificate, Patch and Rocker and a rider and co-rider may have their picture taken together. Group photos are welcomed as well if you are doing the Tour as a chapter, every member and guest must be in each photo (please ensure that at least some of your motorcycles are in each picture).
You must then complete and submit the on-line application form (if you are doing a Tour as a group, you need only complete one (1) application form with all the names of the members who participated and one (1) address where your certificates and patches can be sent). You must then send your photos to the Grand Tour Chairperson at grandtour@redknightsmc.com. Please make sure that your pictures are no larger than 1MB each. If your email is over 25MB you must send another email with the remaining photos.
When you have completed all five Tours you will be sent a GRAND TOUR MASTER Certificate, Rocker and a Brag Coin. The Coin has the International Seal on the front and a picture of the Memorial Stone on the back and the inscription Grand Tour Master on the outer rim.

Online Tour applications are sent directly to the Grand Tour Chairperson with just the click on the Submit button. You must send your pictures in a separate email to the Grand Tour Chairperson, no external sites will be visited to retrieve the photos, email only. Online Applications will not be processed until all of the supporting photos have been received by the Grand Tour Chairperson. Please make sure that your pictures are no larger than 1MB each. If your email is over 25MB you must send another email with the remaining photos.
Some members who live in more remote areas may need to travel great distances to find the letters they need, so we have made a provision that you may use the same station for more than one Tour but we ask that you please visit that station(s) a second time (we will not accept the same picture for more than one Tour).

If non-members complete a Tour with you please enter their names on the ‘GUEST’ line and they will be sent a certificate and a lapel Pin. This is only for Non-Members; they will only receive a maximum of two (2) Pins.
The board has also decided, on the recommendation of the Grand Tour Committee, that, due to the sheer numbers of pictures on file we select one picture from each Chapter and add that to a slide show that will be shown at future conventions. All other photos will still be stored for future reference. This means that photo albums will no longer be on display in the Hospitality Room at Conventions. If you sent in photographs and you want to see all the pictures of your Tour. Please send a request to the Grand Tour Committee Chairperson no less than six weeks prior to the convention so that arrangements can be made, you will need to provide a jump drive or SD card.
Examples of fire Stations whose names begin with each letter.
G -Grantville Fire Company
R -Reliance Fire Department
A -Alpha Fire
N -North Pole City Fire Station
D -Denver Fire Company

If there are any questions about the Grand Tour program, you can email the Chairman at grandtour@redknightsmc.com